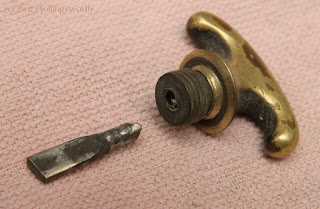 Our house is somewhere around 100 years old, give or take 20.  The front door lock is original.  Over time, the door frame itself has sagged, and the latch bolts no longer lined up quite right with the holes in the latch plate.  This created a lot of resistance whenever you locked or unlocked the dead bolt, to the point where we had to lift the whole door upward (by the door knob) in order to (un)lock it.  The brunt of this resistance was absorbed by the brass knob for the dead bolt, and it eventually broke.  Since I'm easily distracted, we spent the next ten months (un)locking the front door with a screwdriver before I finally got around to repairing the lock.  The fix was so simple, I should have done it right away. 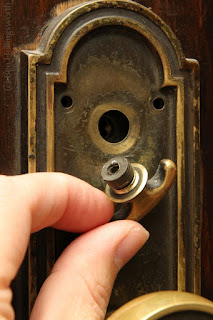 The knob itself had a small shaft (about 1/8" diameter and 1" long) on its back side that fit into a slot inside the door and indirectly moved the dead bolt.  The problem occurred when this shaft snapped free from the back of the knob.  Of course, I still took apart the entire door lock mechanism just to see how it worked, even though it wasn't really necessary.  I am a guy, after all.

I had initially intended to visit the local antique hardware store, Connor's Architectural Antiques, and try to find a replacement.  Fortunately, before I got there, it occurred to me that I could probably just reattach the two pieces using a suitable metal epoxy.  After consulting the web site ThisToThat.com, I decided to use JB Weld for the job.  A visit to one of the steampunk DIY forums confirmed that this was a popular choice for brass.  I've used JB Weld for emergency repairs on steel back in my Jeep days, and I had some on hand.  For some reason, it never occurred to me to use it for brass.

What enabled this repair is that the shaft wasn't simply sticking out from a flat surface on the back of the knob.  There was actually a hole on the back of the knob into which the shaft fit tightly.  The extra surface area provided by the walls of this hole gave the epoxy bond the strength it needed.  Had I been limited to just a single, 1/8" diameter surface, the bond never would have held.

The key to any secure bond is surface prep.  I cleaned both surfaces as well as possible using sand paper, brake cleaner, and Q-tips.  Once all the crud was gone, I scored the surface of the shaft with a utility knife so that the JB Weld would have something to grab onto during the rotational force of every day use.  I then roughed up the remaining shaft surface with some 60-grit sandpaper, just for good measure.

JB Weld is a 2-part epoxy.  I used the Kwik variety because it's what I had, but the slow-curing variety gives a stronger bond.  Using a toothpick and a spare bit of cardboard, I mixed up a tiny bit of resin & hardener and filled the hole with it.  Be careful not to get any on your skin.  I then inserted the shaft into the hole as tighly as possible and left it to cure for 24 hours.

While the epoxy was curing, I used a file to bevel the edges of the dead bolt and latch plate so that there wasn't so much resistance when the knob was turned and the parts contacted each other.  All of these parts are brass, so working them with a file is really easy.

Once everything was back together, it worked like a charm.  There's virtually no resistance when turning the dead bolt knob, and the visible surfaces still look original.  It only took my wife a week to remember not to bring a screwdriver with her when she retrieved the mail every afternoon.

Have you ever had to repair a piece of old hardware rather than replace it?  I'd love to hear your story in the comments below.
Posted by Obi-Wan at 8:00 PM

Email ThisBlogThis!Share to TwitterShare to FacebookShare to Pinterest
Labels: Repair