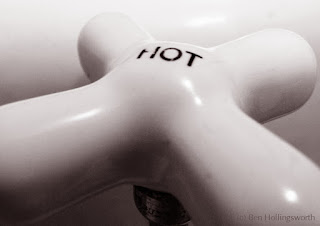 I've been trying to nail down the specifics of some of the infrastructure of our new home.  We knew we wanted to use a geothermal heat pump to heat the house because it's dirt cheap (no pun intended) to operate, and with the government incentives currently in place, it's not all that much more expensive to install than a traditional furnace & A/C.  I had heard rumors that it could also be used to provide "free hot water."  Since heating water can use anywhere from 20-30% of a home's annual utility bill, reducing this cost can have a significant impact on a home's operational cost.  I wanted to share what I found about that.

First off, this isn't meant to be an authoritative reference on the subject of domestic hot water.  It's just one guy's attempt to learn what's best for his new home on an acreage in Nebraska.

There are LOTS of web sites that discuss this subject, but a disturbing number of them quote the same text verbatim.  One of the most useful sites I found is the US Government's Department of Energy:  Energy.gov.  Our local Home & Garden convention was held about the time I was researching this, so I also spent a few hours there talking with several HVAC installers.

When a geothermal heat pump (GHP) is working at cooling or heating your home, the compressor gives off a small amount of heat.  By installing a "desuperheater" on the unit, you can use that excess heat to warm your domestic water.  Water from your water heater or holding tank is pumped through the desuperheater, where its temperature is raised to no higher than 120 degrees Fahrenheit (50C) before it returns to the tank.  Circuits in the GHP only run the pump if the desuperheater is warm enough and the water is cool enough to do some good.

Normally, the desuperheater only works during the summer when the GHP has excess heat to spare.  During the winter, all available heat goes toward heating your home.  During the spring and fall (in our climate, anyway), the GHP doesn't run often enough to do any good.

In order to use the GHP to heat your water year round, you need to have a "water-to-water" unit which will run the GHP to heat water even if the home's air temperature doesn't require it.  According to the professional installers I spoke with, this capability adds about $1500 to the up front cost, but then heats your water for only one third the cost of a traditional electric water heater.  Incidentally, these water-to-water units will also provide heat for an in-floor radiant heater.

I've gotten conflicting recommendations on the best way to incorporate GHP hot water into your home.  One installer said that a water-to-water unit, could easily maintain a 120F temperature in a 60-gallon holding tank with no need for a back-up on-demand water heater.

Another installer recommended using just the desuperheater to pre-heat the water in a 40-gallon holding tank, which would then be fed as the input to a traditional water heater (or an on-demand heater).  This would certainly reduce the work load of the second heater, but you'd still incur the cost of that second heater in your up-front expenses.

The former method sounds simpler and therefore more desirable, but I'll have to do a bit more research to determine which installer has the better option.  Both of those installers claimed that they'd been doing geothermal heat pumps for longer than anybody else in town.

Interestingly, all of the major installers I talked with said that they recommend the WaterFurnace brand of GHP's.  WaterFurnace has been in the business longer than anybody and manufactures the best product.

As an alternative to using GHP to pre-heat the water, I looked into using a passive solar water heater on the roof to do warm a holding tank, which would then be fed into an on-demand water heater.  I'd seen such a setup recommended on This Old House.  The local installers and some other web sites said that solar water heaters are expensive to install, and with the low cost of GHP hot water, the return on investment would take forever in Nebraska's climate.  The only advantage would be that you could have hot water even during a power outage (as long as it was sunny).  But honestly, how often do you lose electricity during sunny weather?  A better option would be to keep the electric water heater and install solar PV panels or a backup generator for emergency use.

I'd read a little bit about using a drain water heat recovery system, which sucks the heat out of your shower & sink drains and then uses that to re-heat the fresh water.  Such systems reportedly cost less than $500 to install, but they generate very little heat.  The local installers said that nobody around here has ever requested one of these systems because it's not worth the hassle.  It might be worth it if you were trying to live off the grid, but not if you're just trying to save money on your hot water bill.

And while it's only loosely related to this topic, I should mention that installers here prefer to install vertical ground loops instead of horizontal or spiral loops.  The surface ground temperature in Nebraska varies from 55F to 75F (or more) throughout the year, and the GHP works more efficiently if you dig down to a more consistent temperature.

Another local anomaly is that even with a GHP unit, Nebraskans still need a back-up gas or electric furnace for those really cold days.  If you size the GHP unit for adequate heating all by itself, then the cooling side will be far more powerful than necessary, and will cycle on & off too quickly to circulate the air, leaving you with stale air.  It's better to size the unit for the smaller of the two loads (cooling), an then augment the larger load (heat) with an auxiliary unit.

If you're interested in discussing all different aspects of green building (including geothermal heat pumps), you may want to check out the Green Building TALK Forums.

If you've got any corrections or other useful info regarding anything I've written here, please speak up in the comments below.
Posted by Obi-Wan at 11:26 PM