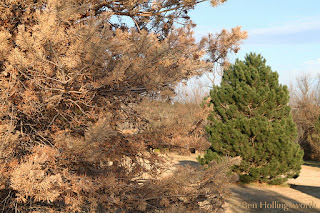 Our next door neighbor at the new acreage is a professional landscaper with Landmark Landscapes.  He bought his acreage just a few months before we bought ours.  The first time we met him that spring, he pointed out that a few of the numerous Scotch pines on our lot looked like they were succumbing to "pine wilt."  We didn't do anything about it at first, but when he mentioned it again in the fall, we decided it was time to act.

Being the nerd that I am, the first thing I did was do a little research on the pine wilt disease.  It turns out that it's become a big problem during the last couple decides in the central Midwest, where we've introduced non-native conifer (evergreen) species and the summer temps get above 68F (20C).  More than 90% of affected trees turn out to be Scotch (Scots) pine, which was a popular landscaping tree around here back before we knew about pine wilt.


Pine wilt is caused by microscopic pinewilt nematodes which feed on and destroy the vascular (water-carrying) system within the tree, effectively starving parts of the tree to death.  These nematodes are carried from tree to tree by sawyer beetles, which prefer to lay eggs in dead trees and feed on live trees.  When a tree starts to die, it's best to cut it down and either chip or burn it immediately to stop the spread of the beetles (and with them the killer nematodes).  There is presently no known cure for pine wilt; once infected, the only way to prevent spread to nearby trees is to remove the infected one.  It's best to remove the trees after September when the cooler temperatures slow the beetle migration.  (FYI, those cooler temps are why the northern climates aren't really affected by pine wilt.)

I was able to find a couple excellent information resources online regarding pine wilt.  The first is a PDF produced by Iowa State University extension office.  The second is a five-minute video produced by the University of Nebraska extension.


Our other neighbor (not the landscaper) also has some trees that are dying from the disease, and is having the landscaper cut them down & dispose of them this winter when his rates are cheaper.  I suppose we'll have to do the same on our plot.  Failure to get rid of them now will promote spreading of the disease throughout our lot and the neighborhood, which isn't a good way to make friends.  I counted three trees on our lot that are completely dead, plus two more that are well under way.  We have another dozen Scotch pines that are apparently healthy, but will probably be gone in another five years.  It's a shame the original owner didn't use more variety when landscaping.

I suppose this also means that we should start thinking about some different species of evergreens to plant out there now so that we've still got some winter wind breaks and greenery if/when the remaining Scotch pines die off.


The tree removal finally happened in late February, which is plenty early to catch the bugs before they revive and spread.


As always, if you have any comments or questions on this post or any other, please leave them below.  We love hearing from you!
Posted by Obi-Wan at 9:21 PM