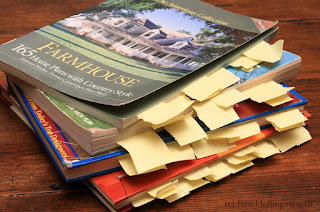 After a couple meetings with the architect we'd chosen to design our new custom home, it became apparent that he wasn't listening to what we were asking for.  After a hefty hourly bill, we ditched him and went back to trying to come up with a plan on our own.

To that end, I checked out several books from our local library that claimed to have hundreds of farmhouse-style floor plans.  I basically just put "farmhouse plan" into the library's search form and took what it gave me.  Those three books combined showed us 745 plans that somebody might consider to loosely resemble farmhouses.

It was a little disheartening just how few of those plans resembled what I would have considered a traditional farm house.  Nevertheless, we still found dozens of designs that had some feature or another that we thought was worth remembering.  We marked lots of pages with Post-It notes, then went back and photocopied them before returning the books to the library.  The closest thing we found to a complete plan that we liked still required quite a bit of rearranging, but at least it's on our short list.

We've done lots of mock-ups on our white board (a 4x4' sheet of melamine), which we then photograph every time we get something we kind of like.  Sometimes we draw entire plans; other times we just detail certain rooms.  Sometimes it's fun to work through ideas, but more often it just feels like a burden.

When we first bought the acreage, we though that designing the house would be a piece of cake because we'd been planning this and keeping ideas for a dozen years.  I'm now of the opinion that all that planning, combined with my perfectionist mentality, has dramatically slowed the process.  I never expected I'd want to punch people for asking me how our house is coming along.  If we didn't know & didn't care what we wanted, we'd have moved in already.  Live & learn, I guess.

I'm also re-reading the "Not So Big House" series, by Sarah Susanka.  Those have been far more inspiring than the floor plan books, but I think they're more useful for tweaking an existing plan than for starting from scratch.  More about that series in other posts.
Posted by Obi-Wan at 4:34 PM