Discussing floor plans with our builder 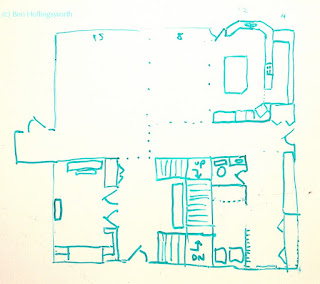 Our progress on coming up with a floor plan for our new home has not exactly been at a stand still, but it has been quite slow.  I've been reading a lot of idea books lately, and we've stood in front of our white board throwing out ideas now & then, but we haven't gotten much farther along than we were back in November before the holiday rush hit.  This week, I feel like we finally took a couple steps in the right direction thanks to a meeting with our builder.

Our builder is actually a guy we've known for years.  I went to high school with Dave McEwen's kids.  Back then, they lived just around the corner from where Stacy & I do today.  Two of Dave's grandsons are in the same school class and on the same YMCA basketball team as our oldest son.  So, of course, we run into him fairly frequently at the ballgames & school events.  He always asks us how our plans are coming, because we first contacted him about building for us last summer.

Stacy has had fewer things on her plate than have I during the past few months, so (to her credit) she's been more driven to get this plan moving.  At last week's ballgame, she scheduled an appointment for Dave to come over to our place and look over all the different floor plan ideas we'd come up with in hopes that he could give us a little direction.  I didn't feel like we were organized enough for that sort of meeting and that it would be a waste of everybody's time, and I continued to feel that way right up until Dave walked through our door last night.  Have I mentioned that I'm a perfectionist?

I'm very glad that Stacy persisted in setting up this meeting before I felt ready.  We talked with Dave for nearly two hours, going over some of the plans we'd found and/or came up with on our own, as well as the the outside look we wanted and the reasons why certain design elements were giving us such fits.  By the time he left, we actually felt pretty good about the latest plan that I'd thrown together at 2am the night before.  The latest round of changes had actually been inspired by a spot we saw on This Old House a week earlier.

Dave was able to answer some questions that we had, like whether we needed more of a load bearing wall down the middle of the first floor (the above design is fine), and how much extra it would cost to create a bay window for the kitchen sink ($1500, if the walk-out basement foundation below it is also extended).  He confirmed a number of the design considerations to which we'd already (optimistically) come ourselves.

The above design still needs to be put down on digital graph paper to make sure everything still looks good at the same scale, which is a problem we've had in the past.  Once that's done, we need to run the numbers to see if we can afford the square footage involved (another problem we've butted heads with).  We're optimistic, though.

Most importantly, I feel a lot better about our current state than I did 48 hours ago, and I'm very glad that Stacy didn't back off until I felt like I was ready for this meeting.  It may never have happened.
Posted by Obi-Wan at 5:37 PM