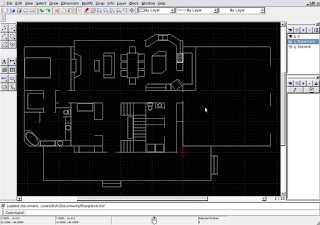 We've been making a lot of progress on our custom home floor plans lately.  After making our initial edits on a white board, we got to the point where we needed to get things more to scale so we'd know what would work where.  After puttering around a while searching for software that would allow me to edit plans on either Linux or Windows, I settled on using the community version of QCad version 2 and saving our plans as DXF files.

QCad is a commercial CAD (computer aided design) software package.  The professional version is v3 at this writing.  It's available for Linux, Mac or Windows at a cost.  The community version (the older version 2) is available as source code from the company, but many other sources make it available as an installable executable.  It's part of the standard package repository on both Ubuntu and Fedora.  Don't confuse the community version with the free trial of the professional version, which expires after 14 days.  I've installed the community version on both our Linux and Windows computers at home (with the design file on a shared drive) so that we can inspect or edit the plans from anywhere that's convenient.

The company has electronic parts libraries and a user reference manual available on their web site as well.

I'd previously used QCad on Linux at work to view DXF files, but I'd never edited with it before.  It turns out it's a pretty decent little program.  I'm sure I have barely scratched the surface of how to do the most basic tasks, but I'm getting the hang of it, and it's not too difficult.

One of its cool features is that you can create different layers of drawings which can be overlaid on top of each other (for reference) or displayed individually.  I setup one layer for each level of our home so that I can compare how things like windows and plumbing relate to their counterparts on different floors.  All of these layers are still stored in the same file, so it's just two clicks of the mouse to switch from one floor to another.


DXF is a standard file format originally created for Autodesk's AutoCAD program.  Because of that, it's a handy format through which to transfer your plans from one device to another, or even back & forth with your architect.

I also downloaded the free "AutoCAD WS" app for our Android phones, which allows us to view the actual DXF files on our phones, show them off to friends, and even edit them if we were feeling masochistic.  Using AutoCAD WS requires creating a free account on the AutoCADWS.com web site.  You upload your DXF files to that web site, and the app automatically syncs its local files with what you've uploaded there.  Stacy and I share the same account on that site, so whenever I make a change to the plans -- or create a whole new version -- using QCad and then upload it to the site, the changes are instantly visible to her on her phone.  It's pretty slick.


Being a generic CAD program, QCad does lack a few features that would make it a bit easier to create higher quality floor plans.  For instance, defining walls to have a predetermined thickness.  All of my current plans have zero thickness walls, which means all of our rooms will get just a bit smaller in the actual, drafted plans.  I can live with that at this stage in the game, though.

If you're still drawing floor plans on napkins, white boards, or graph paper, you should definitely check out these free programs.  If you've got any other recommendations on software you've found handy for designing floor plans at home, please speak up in the comments below.
Posted by Obi-Wan at 1:45 PM