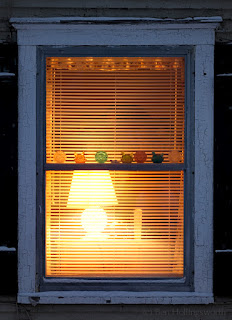 We went window shopping today... for windows.  In the plans we currently have drawn up, there are 50 windows which could represent 10% of the total cost of the house.  That seems to us like a pretty good target if we're looking to cut costs.  We knew virtually nothing about the various window options, so this was an informative morning for us.

Then again, we don't want to throw a bunch of cheap junk in our house just to keep costs down.  Replacing windows down the road is a lot more difficult & expensive than, say, replacing counter tops.  We don't necessarily need top of the line windows, but we want something better than average.  We want good trim detail, low maintenance, and high energy efficiency.

We stopped at two retailers today.  First came Window Option Specialists, which carries Marvin, Integrity, and Gerkin.  The salesman there (who turned out to be a high school friend of my youngest brother) seemed knowledgeable and very interested in finding the right fit (not just the easiest or most expensive fit) for our house.  He took all our info & will get back to us with an official quote a week later.  The total was about $35K for Marvin.  Integrity (a Marvin company) runs about 15% less than Marvin, they said.  The quote came in at $28K.  Both Marvin & Integrity supposedly specialize in the 100-year-old look that we're going for.  Our builder put Marvin windows in his own half-million-dollar home.

Our second stop was at Lowes, where we looked at Pella windows.  The millwork salesman was willing enough to plug our requirements into a computer and give us a quote on each window, but didn't seem at all interested in the big picture of our house.  He basically just went down a checklist of options for each window, then gave us a price.  We priced a few windows in Pella's 450 Pro line and came up with a total for the house of somewhere in the ballpark of $27K.  Lowes didn't have much of a showroom, so we really don't have a good idea of what the windows would really look like or how they're constructed.  In retrospect, we probably should have gone to the official Pella retail store rather than to a big box store.

We did just that a few days later, with much better results.  Their ProLine is the middle of the road, and as cheap as they recommend if you want decent quality.  Their Architect Series has the look we want, but is considerably more expensive than their ProLine.  The difference is in the little details like having a taller bottom sash frame and old-school spoon latches.  To me, the ProLine looks very pedestrian.  Pella priced out our house at $20K for the ProLine, and didn't give us a quote for the Architect Series.

What we learned from this is that there could be a $15K swing in the price between medium grade and high end windows.  We'll get more detailed quotes once we have the house plans nailed down and know exactly what size windows we need.
Posted by Obi-Wan at 8:00 PM