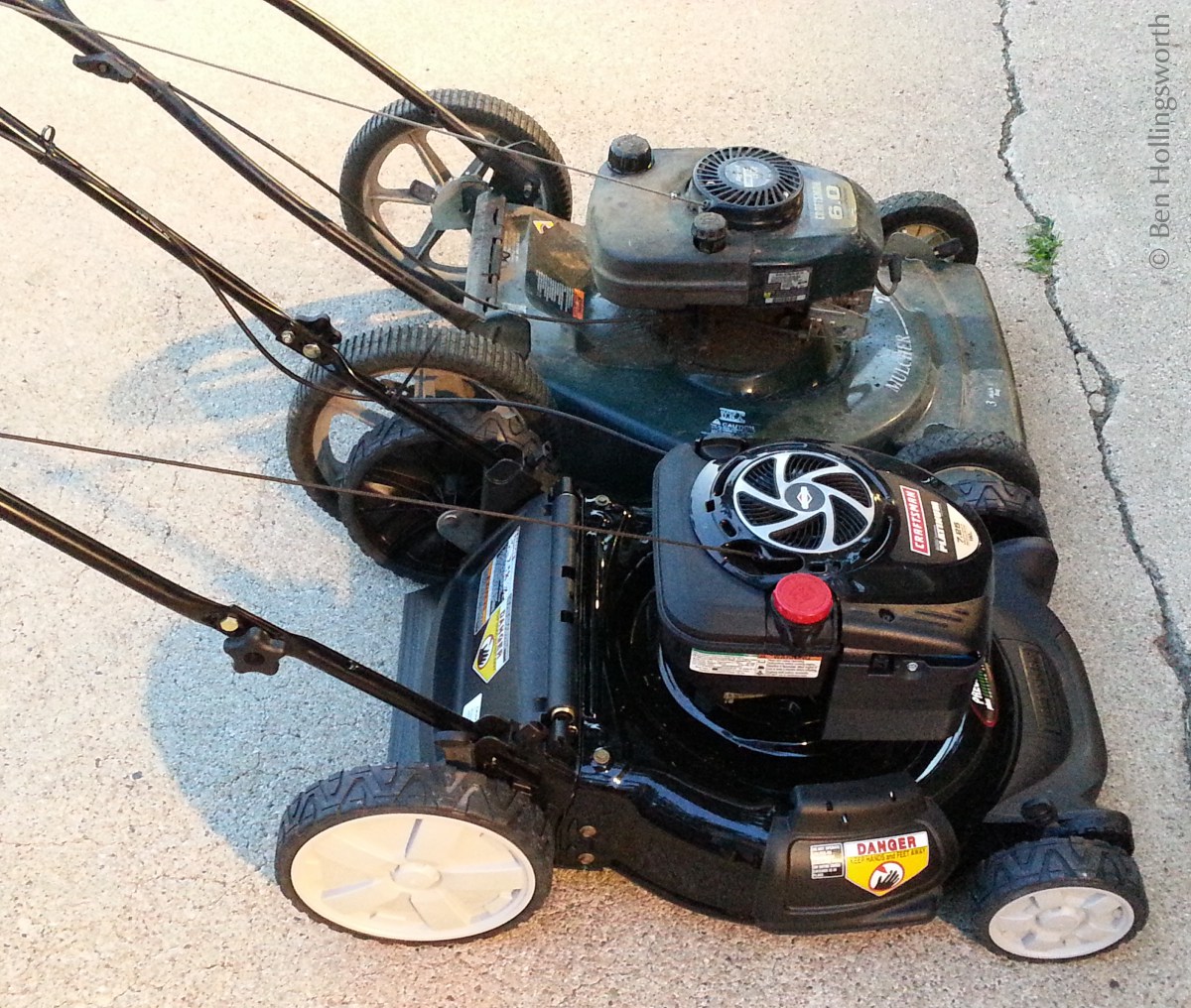 When we bought our old house 16 years ago, we bought an inexpensive Craftsman push mower to care for the smallish lawn.  It held up well (a little less so after our kids started using it), but has been showing its age lately.  I patched the rusted-through deck with duct tape (which worked quite well), and I've had to rebuild the carburetor every couple years when it didn't want to start.  Last week, even cleaning the carb wasn't enough to keep it running, so I decided it was finally time to upgrade.  I did lots of research and ended up coming home with another Craftsman that was very similar in concept to our old mower.  Given the amount of time I spent on this decision, I figured I should share my thought process with you all.

Ever since I was young, I've preferred non-self-propelled lawn mowers.  They're far lighter weight and more maneuverable than their self-propelled cousins.  They're also cheaper and have fewer moving parts to break.  I've also grown fond of large rear wheels, as they roll more smoothly over uneven terrain.  We typically mulch our yard, but we occasionally bag it for compost, we'll probably be wanting a side chute when we move to our acreage next year.  Despite wanting a light weight mower, I still wanted a powerful engine that wouldn't bog down when the grass was too long or too wet.

After looking around a lot online, I compiled a short list containing three models:

One thing I learned is that there are very few companies that actually make their own push mowers any more.  MTD makes most of the mowers you see in big box stores -- a fact that's pretty obvious if you look carefully at the design details of various brands.  The Craftsman and Troy-Bilt mowers above are nearly identical in their basic design.  The big difference between those two is the motor used.  Husqvarna makes their own mowers, and use a significantly different design.

Briggs & Stratton is probably the most popular small engine used today.  Therefore, parts and repair services should be easy to find just about anywhere.  The 725ex model is also the most powerful engine I found on any mower meeting my criteria.  The Honda motor, though somewhat smaller at 160cc, is only slightly less powerful.  The big selling point of the Honda is that it's significantly quieter than the B&S engine.  Like 40% quieter, by many accounts.  Honda also has a reputation for longevity, so this engine had plenty of appeal.

Speaking of engine power, I learned that sometime in the last 16 years, mower manufacturers switched from advertising horsepower to advertising torque.  Even though torque is probably the more meaningful number for lawn mowers, I bet this was actually a marketing move, as the torque numbers are generally larger than the horsepower numbers, which will fool some people into thinking the engine is more beefy than it really is.  For example, our old mower had a 6.0hp engine.  The Honda engine has only 4 hp, but 6.9 ft-lbs of torque.  Which number do you think looks better? 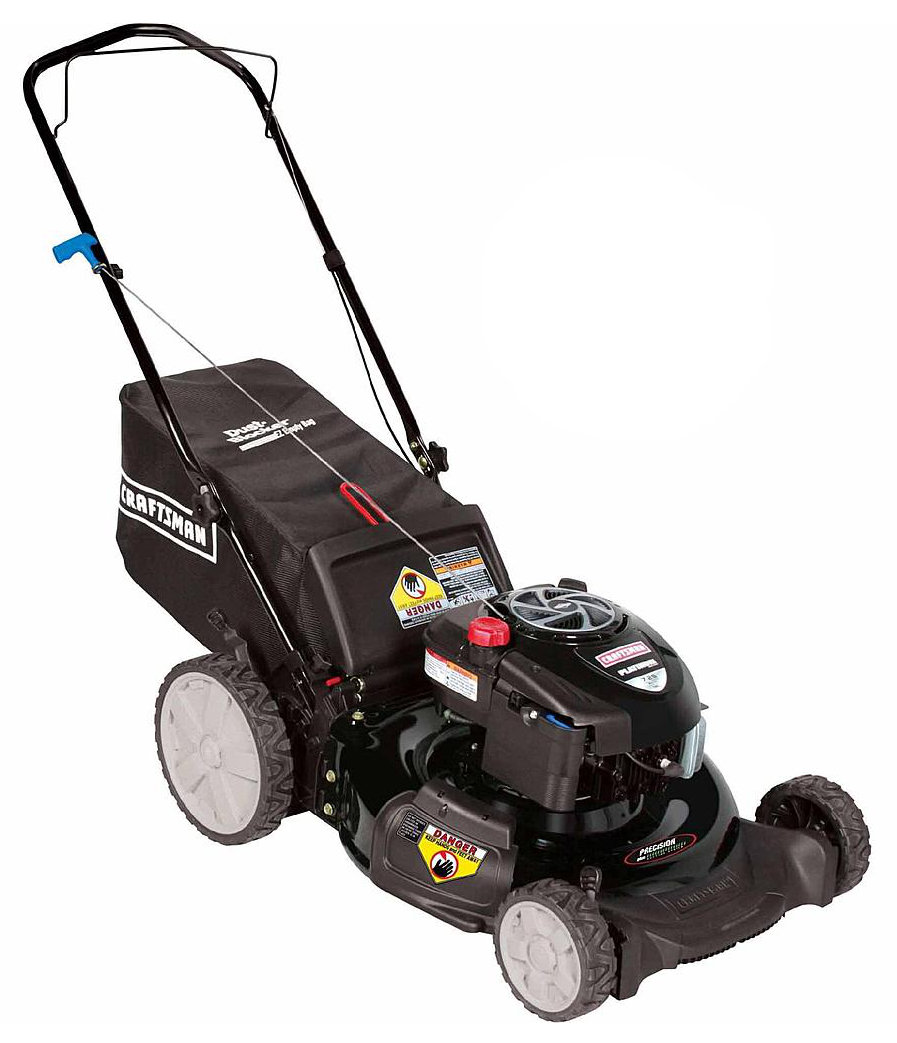 The Craftsman 37037 has the most powerful and loudest engine.  Sears and B&S are both major players, so parts for the mower should be readily available for a long time to come.  The B&S engine has no primer bulb & no choke -- it automatically adjusts as necessary for 1-pull starts in any condition.  This is great when it works, but the most common complaint by reviewers was that this feature had failed, leaving the engine unable to start at all.  The excessive use of plastic worried people, though no breakage was ever reported.  This plastic no doubt also contributes to the low 70-lb weight.  Other complaints were that the front of the deck was shaped to blow leaves around when you tried to mulch a pile of them, which isn't something I do very often. 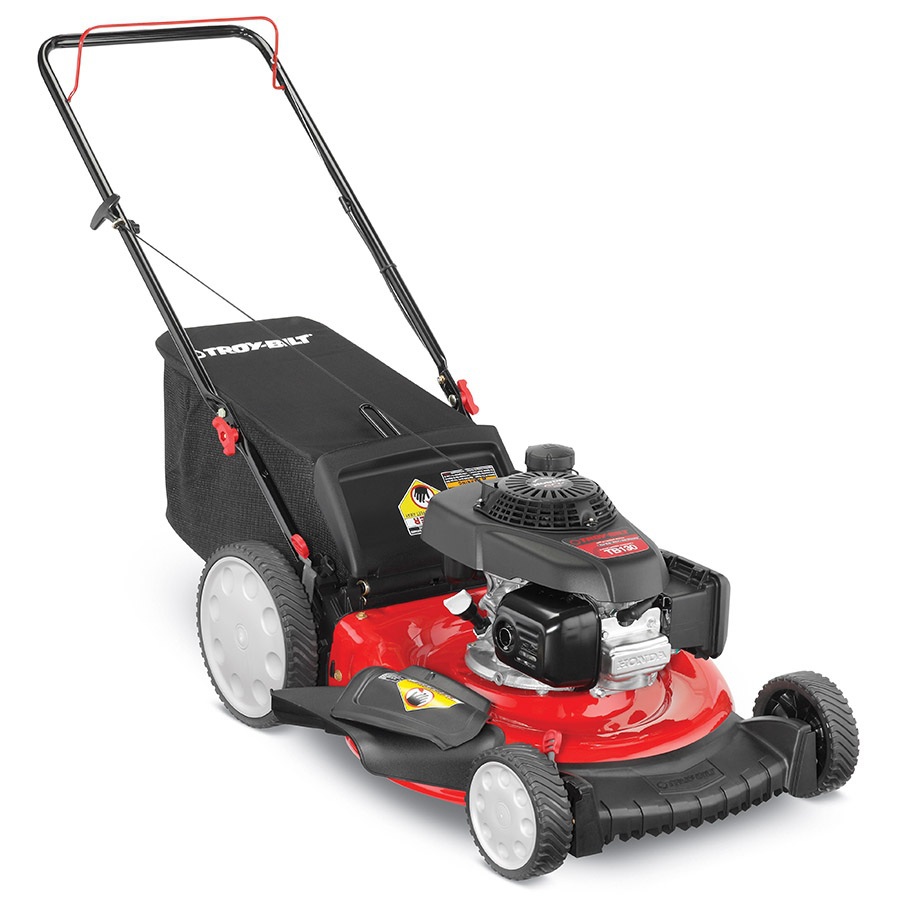 The Troy-Bilt TB130 appears to be constructed nearly identically to the Craftsman, but it claims to weigh 10 lbs more (80 lbs).  As with the Craftsman, people complain about the plastic and the difficulty in mulching leaves.  Reviewers rave over the quiet engine, but there were some complaints that the engine didn't last as long as it should (this is Honda's bottom-of-the-line small engine).  The engine has a choke lever that automatically backs off after a few seconds, so some manual control is still available.  Almost nobody complained that the 4hp engine was underpowered, and many said it was surprisingly powerful.

The Husqvarna 7021P has an all-metal deck with very little plastic, which you'd think was nice.  However, people complain that the wheel and handle mounts feel flimsy when in use.  The front deck design seems to eliminate any problems with mulching leaves, unlike the MTD-designed Craftsman and Troy-Bilt decks.  This model claims to be the lightest on my list at just 66 lbs.  Since it uses the same engine as the Troy-Bilt, those same comments apply.  Although there are several Husqvarna dealers in my town, none of them stocked the 7021P, so I couldn't see it in person and would have to wait for delivery before I could use it.

After spending lots of time reading about each of these models, I finally got tired of it and just headed to Sears.  I looked over the Craftsman 37037 and a few similar models first hand and talked with a salesman who actually seemed to know a little bit about them.  He confirmed some of the negative points that I'd read in the reviews, but eventually talked me into coming home with the 37037 model.

Assembling the mower was easy enough:  Unbox it.  Extend the handle.  Wrap the grass bag around its frame (this was the hardest part).  Fill the engine with motor oil (included) and gas.  Pull the starter cord up to the retaining loop on the handle.  Pull the starter cord once (yes, only once, right out of the box), and the engine fires up immediately.

My 12-year-old daughter pushed the mower around on in the grass just a bit and confirmed that it was noticeably lighter than our old mower.  A few days later, she mowed the lawn with it for the first time.  Wow!  I don't remember the last time the lawn had such a clean, even cut.  I did notice that the engine was rhythmically surging for the first 10-15 minutes that it ran, but it didn't seem to affect the functionality any.  The surging went away by the time she was done mowing.

I also tried out the hose quick-connect on the mower deck that's supposed to easily clean off the underside of the mower when you're done.  As I suspected, it's a gimmick.  It did a lousy job.  It gets a lot cleaner by simply laying the mower on its side and hosing it off the old fashioned way. 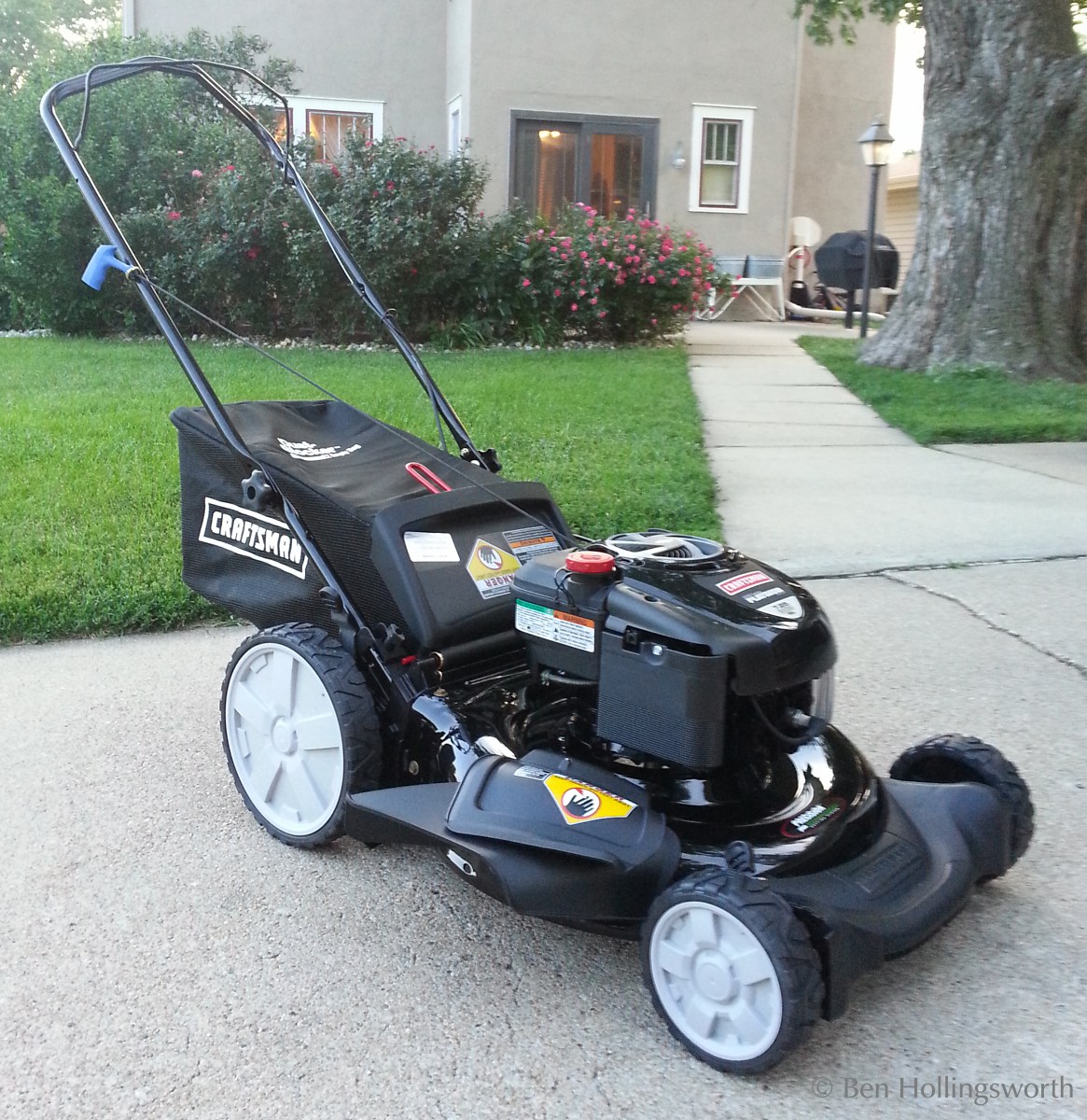 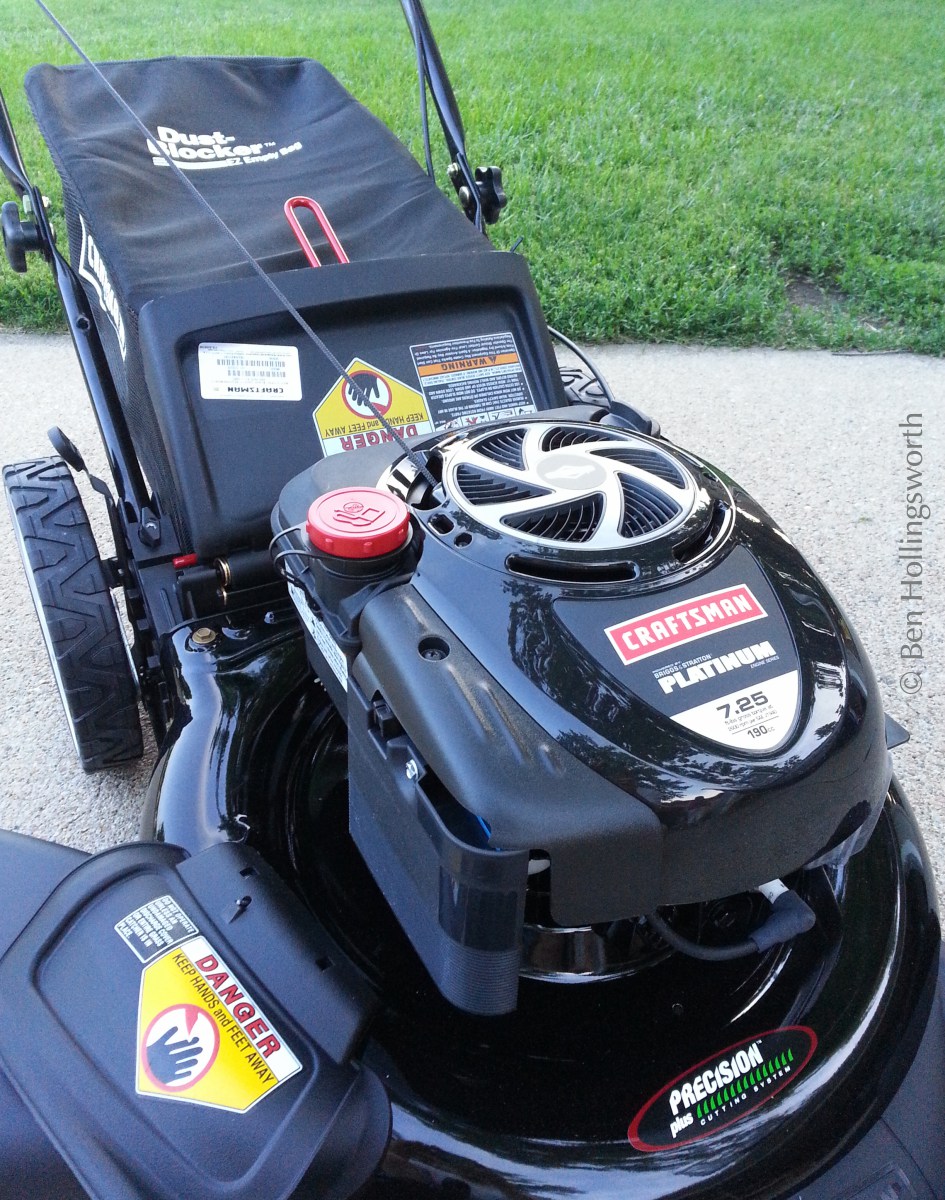 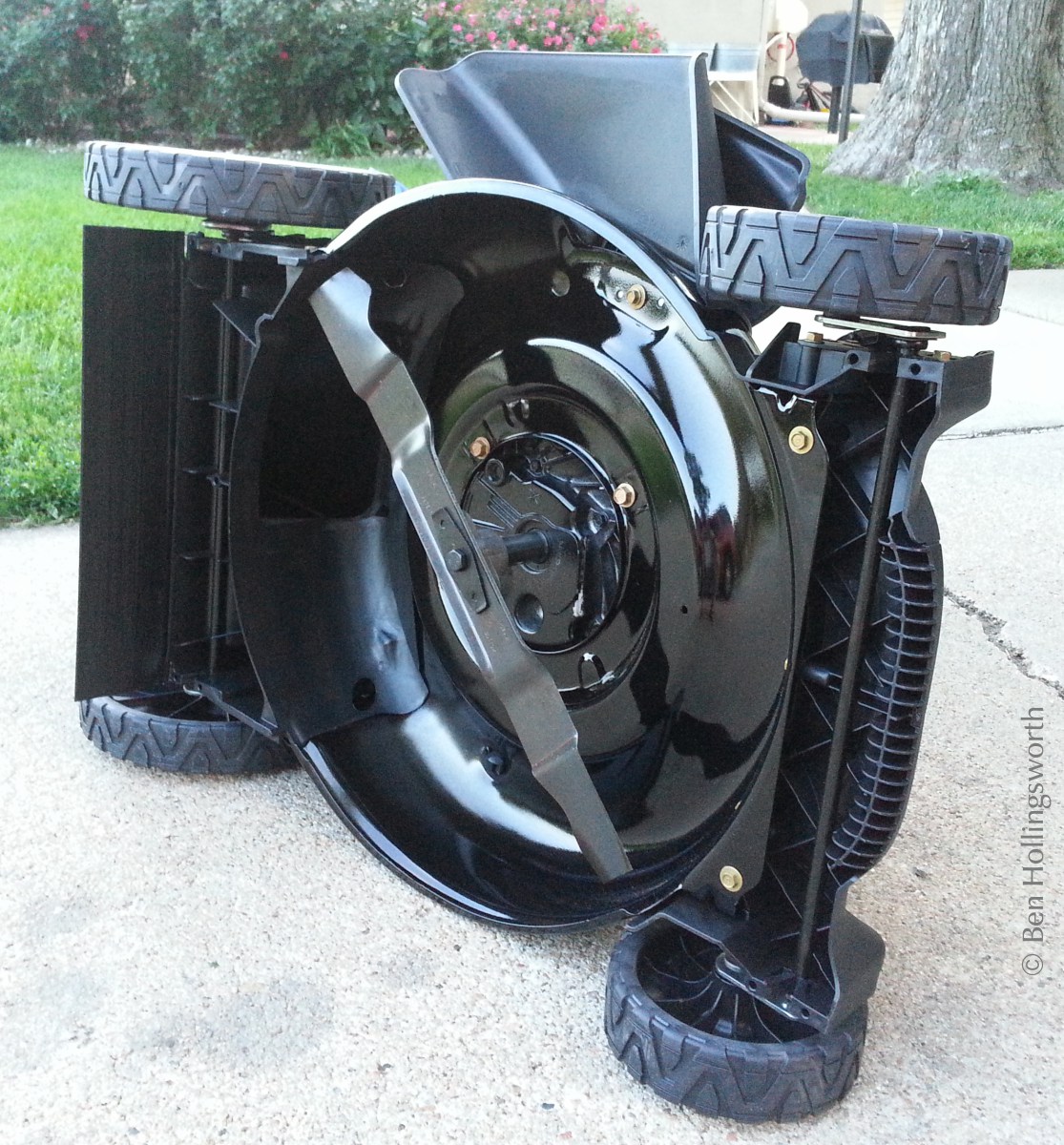 What's your favorite lawn mower feature?  What do you look for first when shopping for a mower, or what do you love most about your current mower?  Please tell us in the comments below!
Posted by Obi-Wan at 8:00 PM