Green acres is the place for me 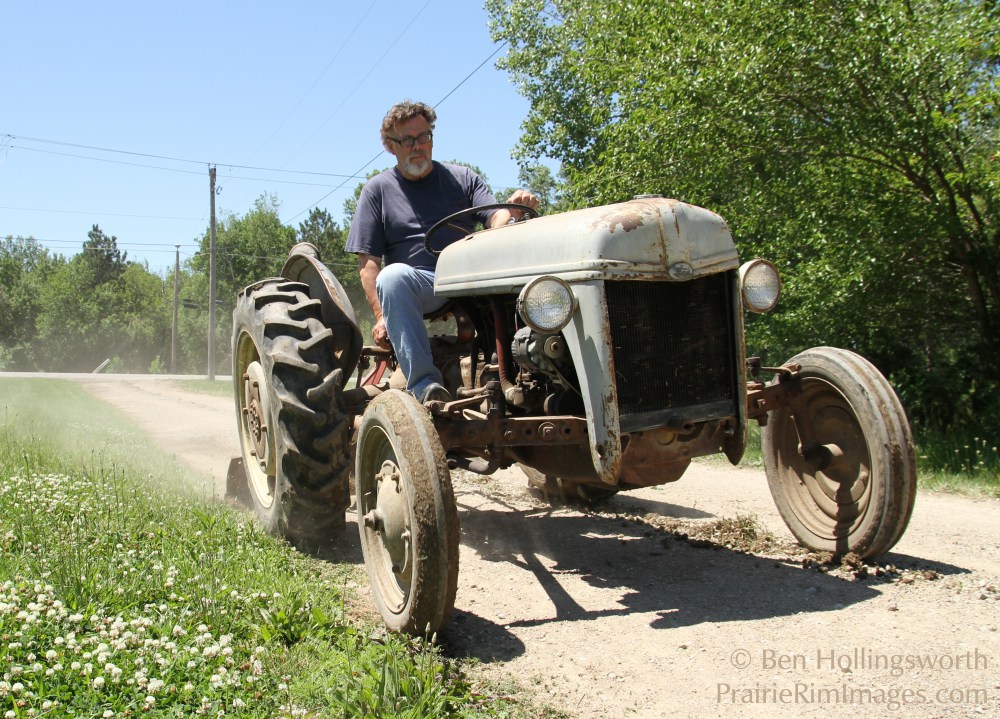 The new 10-acre plot that we just purchased has about a quarter of an acre (100x100') that the previous owners used for gardening.  That's obviously too big a garden to manage without either a large team of people or some mechanized assistance.  The family from whom we bought our acreage also had a 1952 Ford 8N tractor that they were willing to sell us, so that sent me on a three-day crash course of not only figuring out which tractor to buy, but also what implements would be necessary and how to use them.  Here's what I learned.

I sometimes tell people that I grew up on a farm, but that's not entirely accurate.  I grew up on a 40-acre acreage that used to be a dairy farm 20 years before I was born (in the early years of my grandparents owning the place).  I owned a horse, repaired fences, and put up the brome hay that grew wild outside the horse's pasture.  That's about the extent of my country boy experience, though.  I've never grown anything edible that wouldn't fit in a raised garden bed.  I wasn't even allowed to drive my grandparents' old 1943 Ford 2N tractor (pictured above with my dad at the wheel).  Consequently, the prospect of buying machines to help manage a quarter-acre garden was daunting.  I had originally thought that an ATV with a plow & pull-behind mower would suit our needs better than a 63-year-old tractor, meaning I was ignorant enough to have completely overlooked the huge garden bed.

The first step in learning the country life should have been to figure out what all must be done to keep up a garden of that size.  After a bit of googling, I stumbled upon the YouTube channel of Everything Attachments, an implement manufacturer in North Carolina.  They've got oodles of great videos that show newbies how to use their tractor accessories and explain why their equipment is better than some of the other options.  Marketing info aside, this was invaluable info for somebody who didn't even know what a disc harrow looked like, let alone what it did or how to use it.  After several hours of watching their videos, I feel like I now have a decent understanding of how to use a compact tractor to maintain a large hobby garden.  Here's the basic steps, as I understand them:

For small gardens, I think that's about it.  Mechanized harvesting machines like combines are overkill for a small hobby garden, so you'll just have to round up the kids and do that part by hand.

Of course, there are more things to do around an acreage than just manage a garden.  There's always stuff to be scooped and lifted, especially if you've got horses or other livestock.  Heavily wooded or hilly areas can present their own set of tasks, but since our acreage is relatively flat and open, I won't worry about that.

Once you understand what all the tools do, you can make a more educated decision on which type of tools will serve you best in your situation.  I spent lots of time reading web pages and forums to get lots of people's first hand opinions about different types of tractors.  There are several classifications of tractors:

The power that a tractor has is a big factor in determining whether it'll do what you want.  Sub-compact tractors, and even low-end compact tractors, will have trouble running a tiller or lifting a 6-foot bale of hay.  If that's something you need to do more than once a year, make sure you get something big enough to do the job.  A Ford N-series has about 27 hp at the PTO.

The weight of a tractor also has a big effect on how much traction it gets out in the field and how well balanced it will be when lifting loads.  A Ford N-series weighs about 2700 lbs with all its fluids, but no attachments or driver.  That's heavier than many newer compact tractors with the same horsepower.

Virtually all tractors will have a 3-point hitch and a PTO, or power take-off unit.  This combination is what controls all of the implements that hook up behind the tractor.  Except for sub-compacts tractors (which have smaller hitches), most 3-point hitch attachments are all interchangeable among different brands.

A front end loader is the powered bucket on the front of a tractor or bobcat.  I'm told that they're the single most useful feature of a tractor... if your tractor has one.  They're optional on many tractors.  The Ford N-series didn't come with front end loaders, but they are available as aftermarket attachments.  People say that they're heavy, and turn the N-series tractors into unwieldy beasts, which is why it's so easy to find used FEL's at really cheap prices.

The collective conscience seems to be split on whether the Ford 8N is a good tractor for a small acreage.  Some say that it's a cheap, reliable tractor that will serve you well.  Others complain that it's underpowered and lacks a good front end loader.

At this point, I think I've decided to go ahead and buy the 8N.  I have neighbors nearby who own larger tractors and whom I can hire or coerce into helping me if a bigger job comes up.  For the lighter jobs like managing the garden, mowing the grass, and grading the lane, the 8N should work just fine.  I'm sure there will be times that I'll regret not having a front end loader, but I'd have to spend about three times as much money to get even an old, used tractor with one of those.  Besides, at 63 years old, this old workhorse is fully depreciated.  If I decide in a couple years that I need something different, I'm sure I can turn around and sell it for what I paid ($2000 including a few attachments).

I'm sure many of you can correct some of the inaccuracies I've inevitably written above.  If you'd like to share your recommendations or corrections, please do so in the comments below!
Posted by Obi-Wan at 8:00 PM