Goldilocks and the three builders 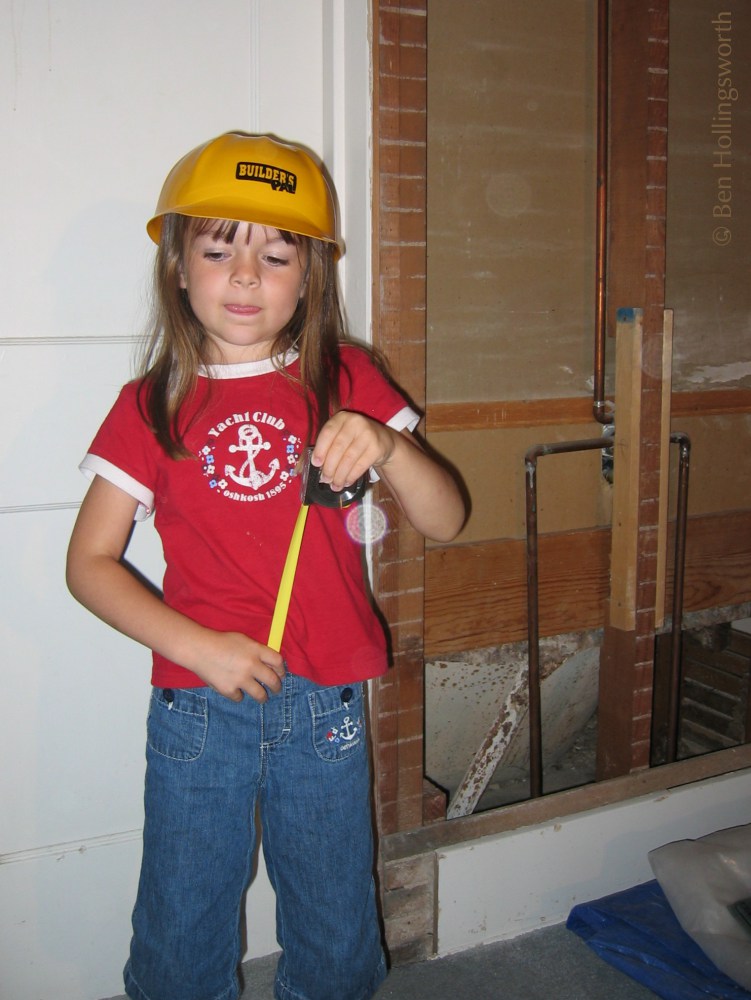 I mentioned last time that we're once again trying to build a new home.  Since we've already got a pretty good idea what floor plan we'll be using, our next step is to choose a local custom home builder after the guy we'd been planning to use retired on us.  We compiled a short list of three builders who were recommended by friends or whose work we'd seen & liked on the Parade of Homes.  We interviewed all three of them this week, and while we haven't selected one yet, I wanted to share our initial thoughts about each one.  If you're looking to build a home near Lincoln, Nebraska, hopefully this info will help you.


A while back, I wrote some general advice on choosing a new home builder.  You may want to check it out in this post.

The three builders we chose this time were Ironwood Builders, Rezac Construction, and Wilderness Construction.  These are listed in the order in which we interviewed each, which has no bearing on which one we like best.  In each case, we setup an appointment at the company office and spent an hour or two getting to know the builder, talking about our plans, and trying to get a feel for what the process will be like with each one.  We got a list of references for each that we plan on calling soon.

We also learned that if we want to get an apples-to-apples comparison of prices from each builder, we need to get a draftsman to draw up a set of official plans for them to work with.  We can still change those plans later; we just need some well-defined specifications for them to bid on instead of my own somewhat vague drawings.  We're told that this will likely take a couple weeks to produce.  Once the builders get the plans, it'll be a couple more weeks for them to get us the bids.

Of course, each of these custom home builders would be happy to help us design a plan from scratch if need be, but that's not what our situation required.

One interesting resource that I found was BuildZoom.com.  Besides the usual builder reviews (of which there were none for our builders), BuildZoom provides a list of building permits for which a builder has applied.  It's interesting to be able to skim through that list and see who else the builder has worked for and what each project cost.  When researching high-end builders, you would expect to recognize some high-profile names or projects from that list of clients.

Joe Steinbach and Roger Bumbarner formed Ironwood Builders about 7-8 years ago (2006-ish).  We've noticed their homes on the Parade for several years now, and have been impressed by the attention to detail and overall quality of their homes.  They generally work on mid- to upper-end homes in the $200K+ price range (the median selling price for a single family home in Lincoln is $140K).  They generally have about 6-8 homes in progress at any given time.

Client communication is a big selling point for Ironwood.  Both guys are very personable (Roger handles most of the selling & paperwork; Joe handles most of the building).  I'd put both guys in their mid-30's.  They showed off the client portal on their web site, which is a central repository for everything related to our job.  It stores all of the communication that either side makes about the home.  It has a list of all the decisions that we'll have to make, along with the deadlines for each and some recommended options if we don't want to do lots of shopping on our own.  As an engineer who's big on documentation, this client portal is a HUGE plus.

They've done 30-40 geothermal heat pumps, but have never worked with solar energy, and didn't say anything that led me to believe they knew a great deal about solar.

They prefer to use spray foam insulation around the rim joist, but just BIB (blown-in-blanket) insulation and Tyvek house wrap everywhere else so that the house can still breathe.

They're fine with letting us do some of the work ourselves, or with us specifying a particular subcontractor that we really want to use on our our house (a relative or good friend, for instance).  Those requests aside, they generally work the the same sub for each type of job, though they do turn over about one sub per year for various reasons.  About half of their subs work exclusively with Ironwood.

Mike Rezac has been building houses in Lincoln for 40 years.  He hasn't had any homes on the Parade for the last year or two because it's hard to talk homeowners into the hassle, but we have seen his model homes on Parades in the recent past.  He was recommended to us by several friends, none of whom had actually worked with him personally, but all of whom had heard great things about him.  Mike generally has 3-4 homes in progress at any given time.

Rezac is widely considered to be Lincoln's expert in green building and renewable energy.  He built and now lives in Lincoln's first net-zero home a couple years ago.  Since I want to get the infrastructure in place to support solar PV (and perhaps solar thermal on my workshop), Mike's expertise would be welcome.

Because he's so focused on building energy efficient homes, Mike prefers to button them up as tight as possible with spray-foam insulation throughout.  Fresh air circulation is handled mechanically with heat exchangers that conserve as much energy as possible.  This sounds like a higher up front cost, but a lower long-term energy bill... if you keep the home buttoned up all the time.  We wonder how much good this system actually does during the spring & fall when we leave all the windows & screen doors open as much as possible.

When he first saw our floor plans, the first thing Mike started looking at was whether they would be easy to support structurally.  I write structural engineering software for a living, so I appreciate that focus.  He's been doing this long enough that he can look at rough plans and immediately know where the problem areas might be.

He typically works with the same set of subs (one per type) all the time.  They've got a well-oiled system worked out for bidding & planning a job that makes it inconvenient (though still allowable) for a newcomer to enter the process.  98% of his sub work is done by the same guys.

Mike has built a wide variety of houses, including at least one a few years ago from his list of references that looks very much like the old farmhouse style that we want.  We'll definitely be calling that homeowner for a tour.

If Rezac has a week point, it may be client communication.  Mike's a very personable guy and appears to be plenty organized, but he has nothing remotely as fancy as Ironwood's online client portal.  He also doesn't do email himself.  The general process is that we phone Mike for any questions, and then follow that up with an email to his daughter / office manager if it's something important that we can't risk slipping through the cracks.  We noticed during our office visit that his daughter was pregnant, which makes us wonder how smooth the communication process will be when she's out on maternity leave.

Jess and Tracy Baker (Jess is the husband) started Wilderness Construction in 2004, shortly after graduating from college.  They work out of their home near Roca.  We actually have very little experience with them.  We were very impressed with the build quality of their $750K Parade home this spring, and got to talk with Jess a fair bit while we were there.  Some friends of ours have also heard favorable things about them.  While they've built homes as cheap as $250K, they generally focus on the more expensive end of the scale.  Unlike the other two, Wilderness does remodeling in addition to new construction.  They typically have about 3-5 new home projects in progress at any given time.

Communication  is a little more traditional.  Jess uses both a cell phone and his Yahoo email address to communicate directly with clients (no office manager middle man, although his wife Tracy still handles many of the management tasks).  No fancy client portal, either.  We're currently testing how quickly he responds to emails.

Jess and Tracy are both very personable.  Jess is perhaps a hair on the talkative side, but he spent most of our initial meeting educating us on the process and figuring out exactly what we wanted in our house--more so than either of the other builders did.  He seems to be very focused on making sure we know enough to make the right decisions so we're pleased with the result.  My wife especially appreciated that.

Jess hasn't worked with solar energy for any clients yet, but he is certified on the subject by US Green Building Council, and seemed somewhat knowledgeable about the details when we discussed it.  He doesn't feel that solar is really a good economic decision yet based on the long ROI, and I tend to agree with him (traditional grid electricity is very cheap in Nebraska).  I just want to get all the infrastructure in place so that adding it 5-10 years from now doesn't require any remodeling.

Like Ironwood, Wilderness prefers to use BIB insulation with a sprayed rim joist so that the house can breathe on its own, rather than building an air tight house and using a mechanical air exchanger that can wear out.

Wilderness has yet to do any homes in the traditional, old farmhouse style, so ours would be their first. Since we already have our plans, most of that farmhouse style will be dictated by woodwork and siding choices that we make ourselves, so as long as the builder has a good trim carpenter, that shouldn't be a problem.

So that's our first impression of the three builders, based on our initial meeting.  I think we'd be happy to have any of them build our house.  However, we feel like we're leaning toward Wilderness Construction right now.  We feel like Jess strikes a good balance between client communication and knowledge of the process.  We'll know a lot more after we talk with a few of the references that each builder provided, and after we get an accurate price estimate back for the official plans that we'll be drawing up next week.

I'll keep you all posted as things progress.  As always, if you've got any questions or suggestions, please speak up in the comments below.
Posted by Obi-Wan at 8:00 PM